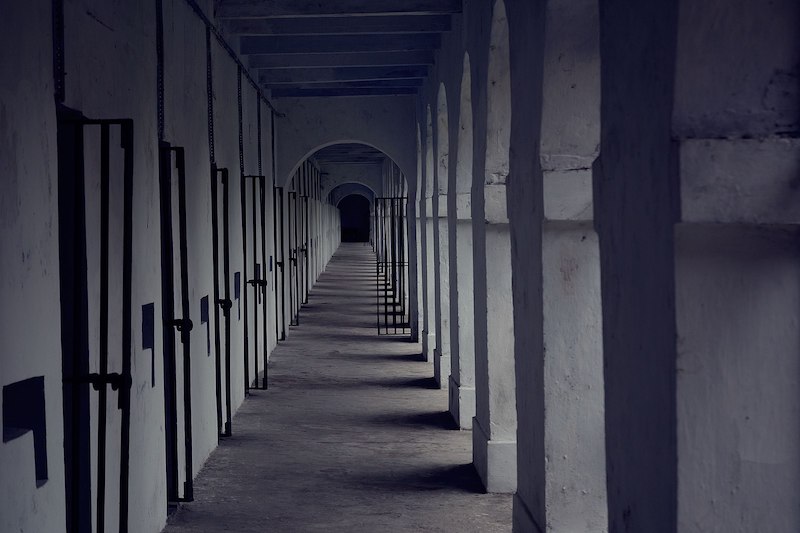 Cellular Jail in the Andaman Islands has a dark and significant history. During the many years of British rule, prisoners were forced into exile in this remote location.

Known as the Kala Pani (Black Water in Hindi), Indian freedom fighters were sent there in huge numbers throughout the early 20th century.

The supposedly “civilized” British officers were anything but when it came to the treatment of the inmates. Conditions were harsh and unrelenting, and from their very arrival, prisoners on Andaman were made to suffer.

Cellular jail existed as a message to political dissidents throughout British ruled India, it was time to fall in line.

Cellular jail is situated in Port Blair, the capital of the Andaman & Nicobar Islands.

Britain seized these remote Islands with the full intention of building a penal colony there. Far from the Indian mainland, it was an ideal place to send rebels stirring trouble for the ruling Raj.

The first such colony was Viper Island, west of Port Blair. After the attempted “Mutiny of 1857” (known in India as the “First War of Independence”), freedom fighters were captured and incarcerated on Viper.

However, as the fight for India’s independence gained traction, the colony proved too small. There were just too many rebels being captured.

The larger replacement became Cellular Jail, with construction taking place between 1896 and 1906.

Conditions in the Jail

The plan was to ensure that rebels spent the rest of their lives in the penal colony. Isolated from their homes and loved ones, they could not influence revolt from their dank prison cells in Port Blair.

Being sent there was the highest form of punishment. Not only was the emotional distance meant to break the inmates, but physical punishments and torture were also commonplace too.

In its working form, the prison consisted of seven three-story cell block wings. These all radiated out from a central guard station, (imagine the spokes of a wheel with the spindle being the lookout tower).

The colony also had an administrative block, gatehouses, and a building to house the gallows.

The prison block had a total of 693 cells; all of which were built so that inmate life was near-constant solitary confinement. There were no proper windows. Ventilation came via a small grill high up on the cell wall.

To ensure prisoners could not see each other while in their cells, the blocks were arranged so that the cell door of one would face the rear wall of another.

Inspiration for the inhumane design came from the French penal colony on Devil’s Island, in French Guyana. The British admired it greatly.

When prisoners did see each other it was while chained together and shackled. The British used the inmates for nearby construction projects as well as the oil mills.

The latter involved the prisoners grinding coconuts by pulling a heavy frame around in a circle, a job done by horses or buffaloes in other parts of the world.

Anyone that failed to toe the line was severely beaten. Plain torture for the entertainment of the officers was also part of the MO. There were also stories of prisoners being subjected to medical experiments.

Many unfortunate souls that ended up in Celluar Jail never experienced freedom again, they died from diseases, exhaustion, or at the hands of their captors.

The closure of cellular jail

After WW1 (which saw tens of thousands of Indians die while fighting for the British) the Andaman penal colony fell out of favor with the ruling establishment.

The harsh conditions were relaxed and by 1922, deportations to the Andamans were suspended.

However, the colony remained open and with further Indian independence uprisings taking place in the 1930s, the prison was once again the location for captured rebels.

This didn’t last long. Significant pressure to end the brutal regime at Port Blair meant that by the end of the decade the repatriation of prisoners had begun. In 1939 cellular jail was finally empty. 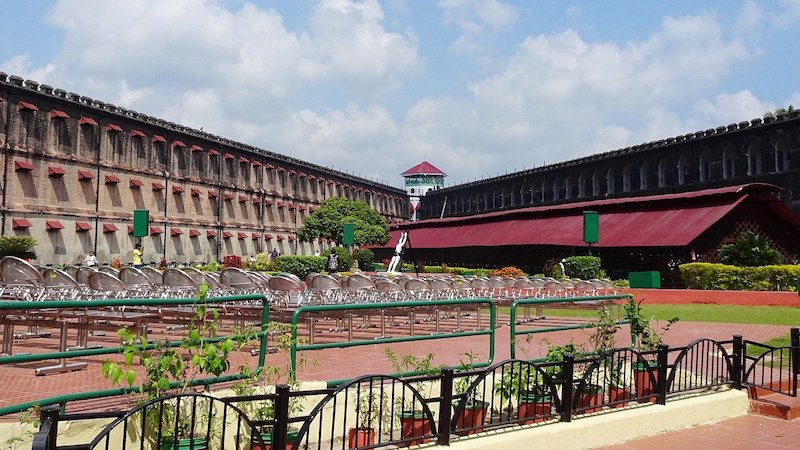 After decades of abandonment (with some parts of the jail demolished to make space for a new hospital on the grounds), cellular jail was turned into a national monument in recognition of the martyrdom of its inmates.

This only happened because of an organization set up by former inmates, called the “Ex-Andaman Political Prisoner’s Fraternity Circle”.

They petitioned the government to acknowledge the prison as a memorial. They also ensured that no significant changes were made to the building.

As a result of their efforts, the Prime Minister of India dedicated the prison to the nation on 11th February 1979.

The three remaining cell blocks have been open as a museum to visitors ever since.

Where is cellular jail?

The preserved cell blocks are the main cultural heritage sight on the Andaman Islands and are a must-see for anyone visiting Port Blair.

It houses exhibitions covering the stories and struggles of the freedom and political fighters during India’s fight for independence, as well as the treatment of inmates within the prison.

The prison also houses a library on the first floor, with books related to the freedom movement. A gallery is located here too.

Facsimiles of original British documents describing policy within the prison are also on display. (As an Englishman, these are a little difficult to read in terms of how the establishment clearly saw the inmates as less than human).

Other areas of the former prison house items that once belonged to prisoners, (clothes, shoes, etc).

I especially liked the large scale model of the prison showing its form with all 7 blocks in place.

Once outside you have the option of heading to the gallows building or exploring the remaining cell blocks.

Looking into the empty cells is a disconcerting experience. One can only imagine the horrible existence it must have been to live within these walls.

You can also climb to the top of the central watchtower, and see the colony from a guard’s perspective.

Apart from the excellent vantage point to watch the prisoners, they also had a fantastic view.

Here you can see the hospital that replaced some of the former blocks, as well as the vista across the strait. A sight that includes Ross Island as well as the glistening Indian ocean.

The gallows is clearly the most macabre stop on the tour. Passing through a doorway you reach a small wooden hut. Inside this, three nooses hang from the ceiling with trap doors below. Executions were so regular, they could conduct 3 at a time. Make of that what you will.

Back in the sunshine of the courtyard and you will see a sculpture of a convict tied to a flogging frame, along with other “artworks” of dummies in shackles and chains, and depictions of forced labor at the coconut mills.

Throughout the year, various other exhibitions are held in the vacant areas of the site.

In the evenings it is also the setting of a Sound & Light Show. Again, the subject matter is obviously the prison and the plight of those that were held there. However, should you have the time, it is worth experiencing the setting at night with the audiovisual element included.