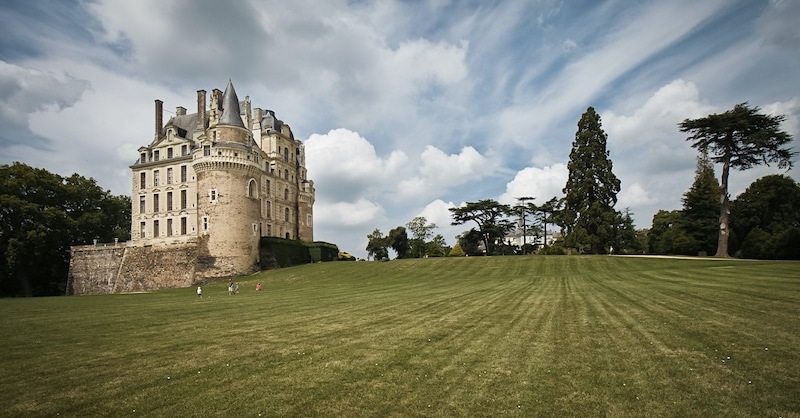 Chateau de Brissac is a sight to behold, it is quite possibly the most beautiful chateaux in France. Less subjectively, with 7 floors it is the tallest in the Loire Valley.

Located in the village of Brissac-Quince in the département of Maine-et-Loire, the château has been owned by the same family for over 400 years.

It is also open to the public for tours and most interestingly of all, overnight stays in its sumptuous guest rooms.

This option has made it popular with those that like a good ghost story. For some time in the 15th century, a double murder took place within the walls of the property.

There is now a rather famous haunting at Château de Brissac, the roaming screaming ghost of la Dame Verte or the “Green Lady”.

The Château Brissac was originally built as a fortified castle by the Counts of Anjou in the 11th century. This was the case for many of the Châteaus in the region due to its being a high-conflict area. (Waring families and the invading English were the main reason for this).

After a victory over the English in the 13th Century, King Philippe II of France gifted the Château to Guillaume des Roches.

The Château had a major overhaul in the 15th century, after Pierre de Brézé, a wealthy chief minister to King Charles VII started rebuilding. Some of the interiors that exist to this day can be attributed to Breze.

A century later during the reign of King Francois I (1515–1547), the property was acquired by René de Cossé. Cosse was close to the king and was named as governor of Anjou and Maine.

Chateau Brissac was severely damaged during the French Wars of Religion in the 17th Century. In fact, the fortifications took such a hit, that the fortress was due for demolition.

However, some wise political maneuvering by Charles II de Cossé (he had sided with Henri of Navarre who later became the King of France), funds were made available for restorations.

The title Duc de Brissac and the money to rebuild the chateau were gifted to Cosse by the king in 1611.

This was the wave of construction work that made it the highest chateau in France. The façade we see today is a result of the rebuild and follows the strict influence of the popular Baroque architecture of the time.

The descendants of Charles II de Cossé (the first Duke of Brissac) maintained the château until 1792. Again, politics and conflict entered the fray and with the outbreak of the French Revolution, the property was ransacked.

For over 50 years one of the grandest châteaus in France stood empty in a dilapidated state.

The property did not change ownership, however. A slow and steady restoration program began in 1844 by the subsequent Dukes of Brissac, with the family being responsible for the château ever since.

The story of the Green Lady 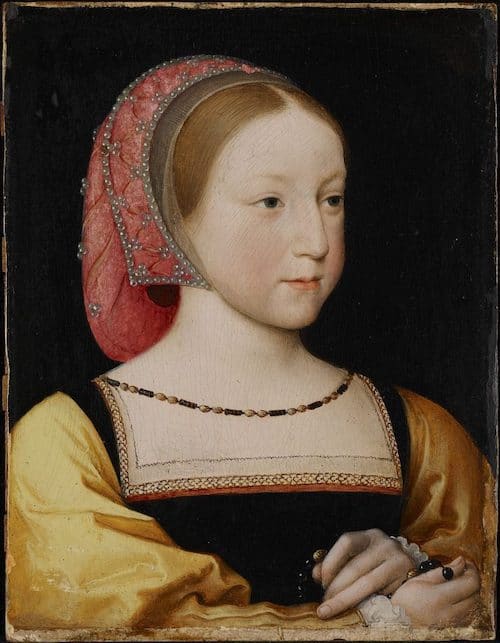 So how did the Chateau de Brissac come to be haunted?

La Dame Verte, or the “Green Lady” is said to have roamed the corridors since the 15th century.

It all started with a double murder that took place after Jacques de Breze (son of Pierre de Brézé) inherited the chateau and married Charlotte of France.

Charlotte was an illegitimate daughter of Charles VII. The mother, Agnes Sorel, was a former employee of the King.

Jacques and Charlotte were less than happy in marriage. Discontent led to adultery; on the grounds of the Chateau on May 31, 1477, Jacques found Charlotte having sex with one of her huntsmen, Pierre de Lavergne.

There are two versions of how Jacques enacted his rage. One states that he murdered the couple on the spot, butchering them with repeated blows of his sword.

The other states that he waited until Charlotte was in the Chapel Tower at Brissac that night. He then strangled her and threw the body out of the window.

Whatever story is true, Charlotte and the huntsman were murdered that day.

There have been repeated sightings of the ghost of Charlotte de Brézé. She is normally seen walking up and down the stairs of the tower belonging to the chateaus’ chapel.

She is named the “Green Lady” because of the green dress that she wears. She is not a happy ghost. Her face is that of a corpse, with large gaping holes where her eyes and a nose should be.

The Green Lady is said to groan in the early morning hours, and many guests have reported hearing this.

Where is Chateau de Brissac?

For those that love the idea of coming face to face with a ghost, it is possible to book a room at the Chateau de Brissac.

Beyond the supernatural undertones, there is very good reason to make a visit.

The Chateau boasts a huge collection of exquisite antique furniture, tapestries, porcelain, and paintings dating as far back as the fifteenth century.

Parts of the property are open to the public for tours, one area being the magnificent dining room with its vaulted, painted ceiling.

Other rooms of note include the King’s Bedroom and the Mortemart Room (Anne de Mortemart became the Duchess of Uzes).

The Room of the Hunt is also impressive and demonstrates the French aristocracy’s fascination with the hunt with an array of trophies, memorabilia, paintings, and decorations.

For experienced horse riders, it is even possible to have a hunt arranged at the Chateau de Brissac. These events do not come cheap, however.

Essentially, the Chateau is an excellent example of how the French have helped to raise design and high art to levels of unprecedented sophistication over the centuries.

It is well worth a visit whether you believe in ghosts or otherwise.