The White Sea-Baltic Canal in northwest Russia has a dark history. It was one of the first large construction projects, fully conducted by the forced labor of gulag inmates.

Stalin’s Five Year Plan and tyrannical push to prove that Russia was an industrialized nation, meant that the canal was rushed to completion.

The collateral death toll was massive. Official records state that between 12,000 and 25,000 laborers died in the process. Contemporary historians put that number as high as 250,000.

The end result was a canal that was too shallow for purpose. The Soviet propaganda machine didn’t waste time in declaring it a success mind you.

It was seen as a flagship achievement, and the fact it never played a significant role in Soviet commerce or industry was largely ignored… as was the brutal treatment of those that made it.

A Short History of the White Sea Canal

The white sea canal opened on Wednesday 2 August 1933, (until 1961, it was known as the “Stalin White Sea-Baltic Canal”). The canal runs for 141 miles along a route that was considered strategically important for the shipment of cargo.

Two major seas off the coast of Russia were connected as a result. Now transit could be made between the White Sea, in the Arctic Ocean, with Lake Onega that connects to the Baltic Sea.

However, as we have already mentioned. Stalin was so intent on having the canal finished on time, proverbial corners were cut: the shallow draught stunted the economic advantages of the canal. Most sea-going vessels could not use it.

The white sea canal was constructed between 1931 and 1933 in a mere 20 months. This was 4 months ahead of schedule.

Everyone involved outside of the head engineers was forced labor. In fact, the Gulag camp administration (BBLAG, the Directorate of the BBK Camps) was fully responsible for the project.

It is estimated that they managed a workforce of over 100,000 convicts at any one time.

Conditions were horrific. Although the Soviets were keen to portray a positive use of the Gulags, (the idea being that they were “reforging class enemies” through “collective labor”), the harsh treatment of the inmates was borderline barbaric.

Prisoners were forced to dig out the canal with primitive hand tools. This was totally inappropriate for the task. The mortality rate (using official records) was close to 10% with an even larger percentage becoming ill or infirm.

Working hours were long, in what at times were below freezing temperatures. Months of brutal toil broke even the hardiest of inmates.

In the early days of the construction, those that died were simply thrown in the ditches running parallel to the canal.

Historian Yury Dmitriev, of the “Karelian Commission on the rehabilitation of former political prisoners under Stalinism”, has spent decades uncovering the truth behind the lives that were lost during the construction of the White Sea Canal.

He has also conducted a large amount of research in order to locate the various unmarked graves that line its route.

It has been no small task. Dmitriev estimates that the Chekists buried approximately 86,000 people along the length of the works during the 1930s.

Uncovering archival documents he has managed to locate scores of unmarked mass grave sites. In a 2015 interview with Meduza.io Dmitriev states:

“It’s the purpose of my life as a person and as a historian to look for the tortured and executed, but a whole lifetime still isn’t enough. Now, I can confirm and point out where the pits and ditches are.”

Doing so comes at a risk, however. Dmitriev is not much liked by local officials or, surprisingly the public.

Maybe they would prefer to forget. Nevertheless, he carries a gun as he walks the canal side uncovering the locations of the long dead.

In much the same way that the Soviets tried to hide the truth, officials today find Dmitriev a nuisance and would prefer him to quit.

A recent attempt by the government to unearth the burial pits around Sandormokh (the aim was to eradicate evidence of the death toll), was thwarted by Dmitriev.

Vigilante to the core, the Historian threatened to use his gun on the driver of the bulldozer if he didn’t turn it off.

Even after the police and officials arrived, the latter ordering workers to continue, no more digging was done. They didn’t want to cross Dmitriev and his gun.

Where is the White Sea Canal? 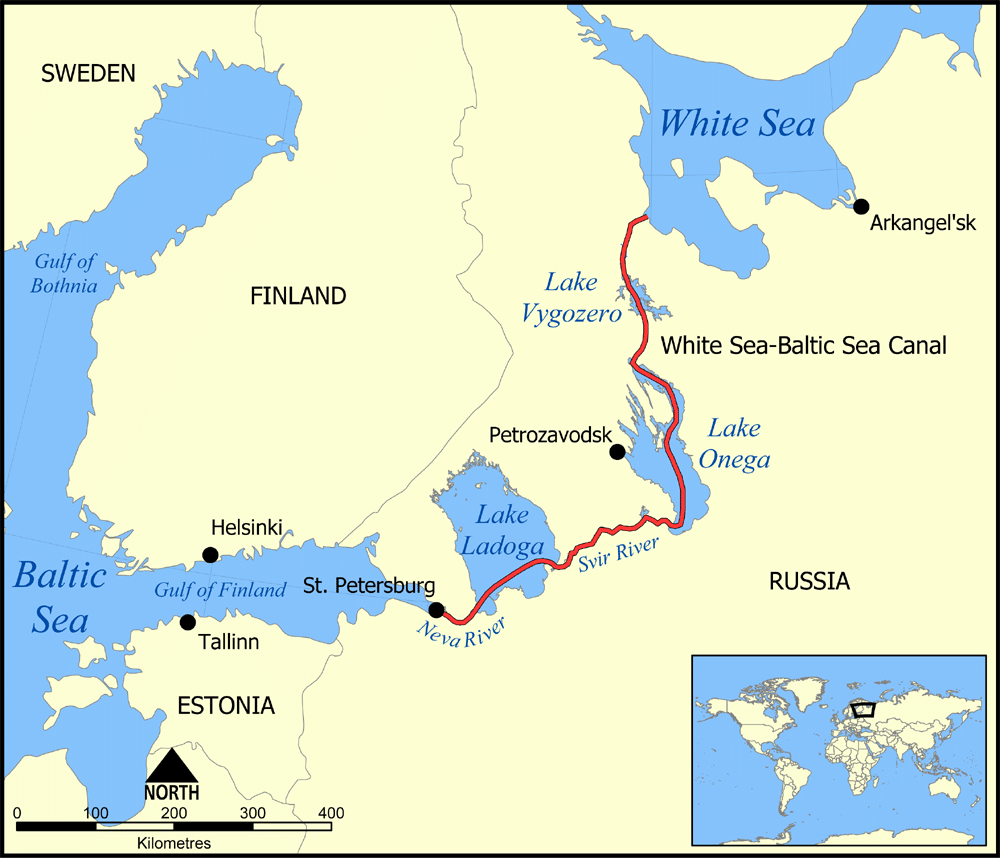 A survey conducted back in 2008, showed that only light traffic of between ten and forty boats use the canal per day.

With the tourism development in Karelia most of these boats belong to tour companies. It is easy to see why the canal has become popular for recreational users.

It passes through a number of the area’s top natural attractions, including several canalized rivers and Lake Vygozero. Old lighthouses and preserved buildings from Tsarist rule are of particular interest along the route.

At one section of the canal, positioned directly on the bank is St. Nicholas the Miracle-Worker church.

If you are doing a private tour or manning the boat yourself, you can also stop off close to Sandarmokh (not far from the Belomorkanal’s first gateway) and walk along the edges in search of the unmarked grave areas.

Dmitriev has erected small plaques at certain locations to draw attention to these sacred sites.

Unfortunately, the Russian government is doing little to raise awareness of the history. Only two small memorials to the Gulag victims can be found along the canal route.

One monument has been erected at Povenets in honor of the prisoners that perished. Another smaller memorial can be found in Belomorsk near the White Sea end of the canal.