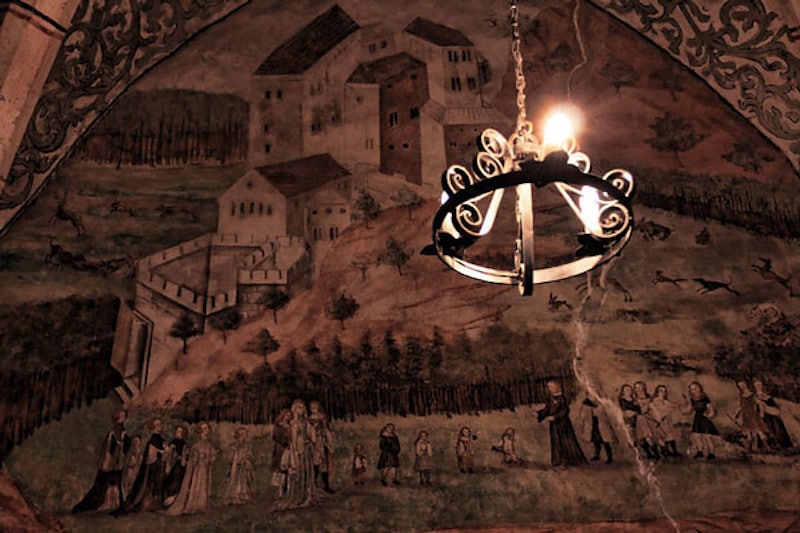 Unraveling the truth from the myth of Houska Castle isn’t easy.

What we do know is that the castle was built in the second half of the 13th century. However, the reason is unclear and in some ways depends on your belief in heaven and hell.

The mysterious gothic castle was built miles from a reliable water source, and history points to it being of no strategic importance.

In fact, a look at the records shows that for long periods the castle wasn’t even inhabited.

It is believed that construction began under the orders of Bohemian ruler Ottokar II of Bohemia, the building was to serve as a center to manage his large royal estate.

That’s a reasonable explanation. However, a more fanciful version is that the castle was designed to stop the forces of evil from entering our worldly realm.

The Legend of Houska Castle

According to legend, the location of Houska Castle is directly on top of a gate to hell.

Apparently, a portal opened on this remote Czech mountain ridge and the castle was built to stop the demons from escaping.

The hole was said to be so deep that the bottom was impossible to find. Inmates that were sentenced to death were offered pardons if they dared to venture inside.

As the legend goes, the first man to be lowered into the hole began to scream within seconds of his descent.

He was quickly pulled out but his mind was already irreparably damaged by fear and his face had aged 30 years. He said that the hole was full of half-man, half-human beasts. The man died two days later inside a mental asylum.

Within the castle, a chapel was constructed directly above the hole so that it would be sealed off forever.

To this day it is said that cars will not start if they are too close to the castle, visitors have heard what they describe as a “chorus of screams” coming from beneath the floors of the chapel. If one listens carefully they may hear the scratching of claws.

Outside the castle, there have been repeated sightings of a strange hybrid creature between a human, frog and a dog. Howling screams in the surrounding woods have also been heard at night.

Houska Castle and the Nazis

Dark associations have never really left Houska Castle. During WW2 it fell into the hands of the Nazis who were clearly attracted to its sinister location above a proposed gate to hell.

The Nazis famously took the occult very seriously, and it is believed that they chose the castle as a location to perform inhumane experiments in an attempt to harness the power of evil for themselves.

Prisoners of war and local people fell victim to the Germans, however, records to the extent of experimentation were destroyed before the end of the war.

Where is Houska Castle?

Public transport to the castle is limited, so one of the best ways to reach the castle is to hire a car for the day. The location is about 30 miles north of Prague. Alternatively, if you are staying relatively close, you could book a taxi from your accommodation.

There is a carpark at the base of the castle and upon arrival, you will need to hike up through the grounds to the main entrance.

Featured Image: Scary Side of Earth (CC by 2.0)