On May 8, 1950, the police in Silkeborg, Denmark were called to a potential murder scene.

A couple of local peat cutters (Viggo and Emil Hojgaard) had discovered a body in a bog near Bjældskovdal. However, the police quickly realized that this was not a corpse that had been disposed of recently.

The fact that it was found beneath 2.5 meters of peat was significant. Rudimentary forensics by the first officers at the scene confirmed that the investigation was one for archaeologists rather than law enforcers.

The police asked a scientist named P. V. Glob to take a look. He immediately recognized that this was an ancient burial site.

The Tolland Man, as he would later be known, was a bog body whose death occurred 2,500 years earlier.

The investigation into the Tollund Man showed that he had died a violent death.

He was nude except for a pointed skin cap of sheepskin and wool and a belt tied around his waist. There was also a noose wound tight around his neck.

Later research suggests that he was killed as part of a ritual sacrifice. After death, someone had closed his eyes and mouth and placed him in the fetal position. He was then laid to rest inside the bog.

As with similar bog bodies discovered throughout the world, Tolland Man was incredibly well preserved.

C14 radiocarbon dating of Tollund Man puts his death sometime between 375–210 BCE, however, the soft body tissues were maintained over the millennia due to the acid in the peat.

This combined with the lack of oxygen inside the bog and the extremely cold local climate, preserved the body in a manner that could never be achieved in normal conditions.

Tests at the Silkeborg Museum in 1950, concluded that the Tolland Man was approximately 40 years old when he died. Although his body had shrunk in the bog, they estimated his height to be 5’ 3”.

The autopsy report in 1950 concluded that Tollund Man died by hanging. The noose was a giveaway, of course, however, strangulation was ruled out because of the visible furrows beneath his chin and at the sides of his neck. Such marks are common for hanging victims.

During a re-examination in 2002, forensic scientists used radiography to examine the body. This showed that the tongue was distended—a further indication of death by hanging.

The stomach and intestines were also examined so that scientists could ascertain Tolland Man’s diet. Over 40 kinds of seeds were identified, and it is believed his last meal was oat porridge.

Reason for the Hanging 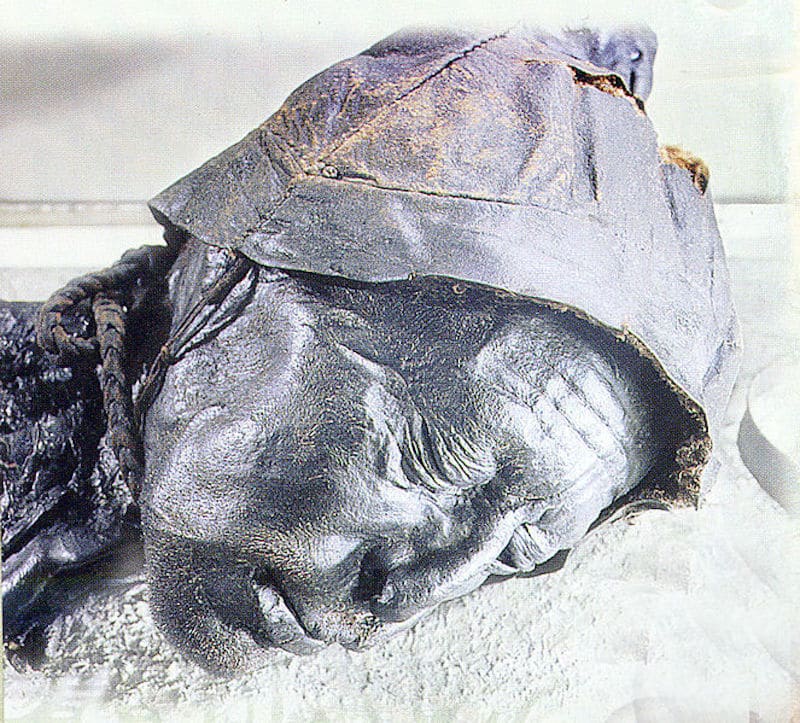 We know that people were hanged during the life of Tolland Man, however, why are scientists so sure that this was a ritual death and not punishment for a crime?

The Roman Cornelius Tacitus has provided us with written narratives told by traders who visited Northern Europe a short time after the death of Tolland Man.

He wrote that “traitors and renegades hang in those trees, cowards, gutless and unnatural fornicators are pressed down under a wicker hurdle into the slimy mud of a bog”.

Could this have been the case for Tolland Man?

One clue is that someone took the time to close his eyes and mouth and place him delicately in the bog. This suggests that his peers could not have been enemies. They did not see him as a common criminal.

We also know that the practice of sacrificing to the gods was occurring in Denmark at this time. The fact they occur within a peat bog suggests that these sacrifices were a thank you for the peat (an explanation for the prevalence of bog bodies in the region).

Or it could have been a seasonal sacrifice. It is believed that the death occurred in winter due to the high volume of oat and seeds found in Tolland Man’s stomach; the locals were asking for the return of prosperous spring.

We shall never know for sure. Ultimately, criminal or sacrifice, it all amounted to the same end for the poor Tolland Man.

Where is the Silkeborg Museum?

Silkeborg is in the center of Jutland (the mainland peninsula of Denmark), approximately 20 miles west of Aarhus. The Silkeborg Museum is located just a short walk from the center of town.

The Tolland Man display shows the original head, however, the body is a reconstruction.

Unfortunately, conservation techniques in the early 1950s were too primitive for the body to be preserved outside the conditions of the bog. After the body was desiccated during the autopsy, the tissue slowly disappeared.

The reconstruction we see today was created in 1987 at the Silkeborg Museum. They used skeletal remains as a base, so size and scale are very close to the original

The facial expression of Tollund Man with his eyes and mouth closed is very peaceful. He simply looks like he’s sleeping. The skin of the face is also very well preserved. He even wears his original hat.

There is also another bog body at the Silkeborg Museum. Named the Elling Woman, her body was discovered 12 years before that of Tolland Man. She is also believed to have lived during the Iron Age.

Beyond the two bodies, other artifacts within the museum stem from the Bronze and Iron Age, as well as interesting permanent exhibits on the Vikings and Medieval times in Scandinavia.

In 1976, the Danish police made a fingerprint analysis of the Tolland Man. His thumbprint is one of the oldest on record in the world.