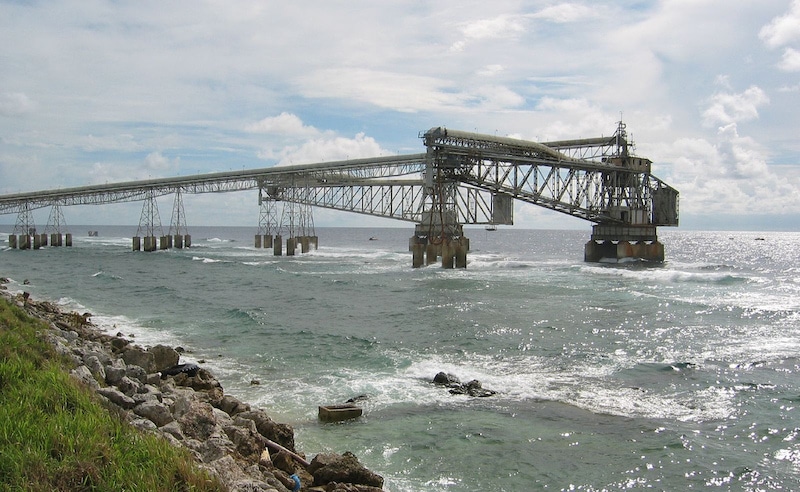 Nauru has had a troubled history, passed from one empire to the next.

As one of the three big “phosphate rocks” of the Pacific, (Banaba in Kiribati and Makatea in French Polynesia being the other two), the island was a remote peaceful paradise until it was discovered by the Europeans in the late 18th century.

Germany took control towards the end of the 19th century, and it wasn’t long after this that phosphate deposits were discovered that would transform the fortunes for the island and its inhabitants forever.

Nauru was covered with a thick layer of guano. The geological impact of a millennia’s worth of sedimentary bird droppings was both a blessing and a curse for the island.

The high level of phosphorus found in Nauru guano was the perfect raw material for fertilizers and explosives. Guano mining became very lucrative as a result, with the German’s extracting tons of it during the Great War.

After WW2 (and a short spell under Japanese rule) the colony changed hands and became a joint British, Australian, and New Zealand territory, (in the 1960s it passed into sole Australian ownership)

The mining continued, however. The business was so successful that by the mid-twentieth century, Nauru had the highest per capita income in the world.

The level of guano extraction was not sustainable in the long term. After almost a hundred years of exploitation, the phosphate reserves were almost stripped from the island completely. In 2000 all mining stopped.

Furthermore, the strip-mining process involved with the extraction had decimated the landscape.

80% of Nauru is now a barren, post-apocalyptic wasteland. Dry and desolate with jagged limestone peaks that were in some places up to 15 meters (49 feet) high, the island became a hostile, eye-sore of a place to live.

Tourism was limited, and with the income from the mining over (and severe mismanagement of the funds that had previously been made), the country’s economy collapsed.

Huge unemployment followed and social and health problems are rife. Nauru currently has one of the highest diabetes rates in the world and the once record per capita GDP is now one of the lowest.

Where is Nauru Island?

Nauru is very remote. Situated in the middle of the Pacific Ocean it is over 2000 miles (3200 km) from the Australian mainland.

The current situation for Nauru remains bleak. With a population of about 10,000 and only a 150-meter-wide strip of fertile land along its shores, the future holds little promise.

Recent money-making plans with other countries (one of which saw the island becoming a tax haven) were met with international regulatory concerns.

After this, Nauru showed greater desperation in the need to earn an income; it opened its doors to Australia in order to become a detention center for asylum seekers.

This has seen local population growth in the form of Iranian and Afghan refugees unable to make an income, only adding to the island’s woes.

Suicides and crime have increased dramatically, alongside the level of desperation of the unfortunate souls that have ended up living on Nauru.

This of course makes it a potentially dangerous place for the average tourist (at the same time as being the proverbial carrot for the more adventurous dark tourist).

The bleak, desolate landscape caused by phosphate mining is one of the main reasons a dark tourist would want to visit Nauru. The limestone pinnacles are a sight you will not experience anywhere else in the world.

The rundown nature of the residential areas is also darkly fascinating. Although visitors should be careful due to the high crime rates.

There are also a few remains left from the Japanese occupation during WWII.

Overall, you do have to be rather committed to checking out this unusual destination as getting there is not easy.

The one airline that flies direct to Nauru from Australia is from Brisbane and the schedule is infrequent, (just twice a week). Once you land you will be forced to spend several days there before being able to catch a return flight back.