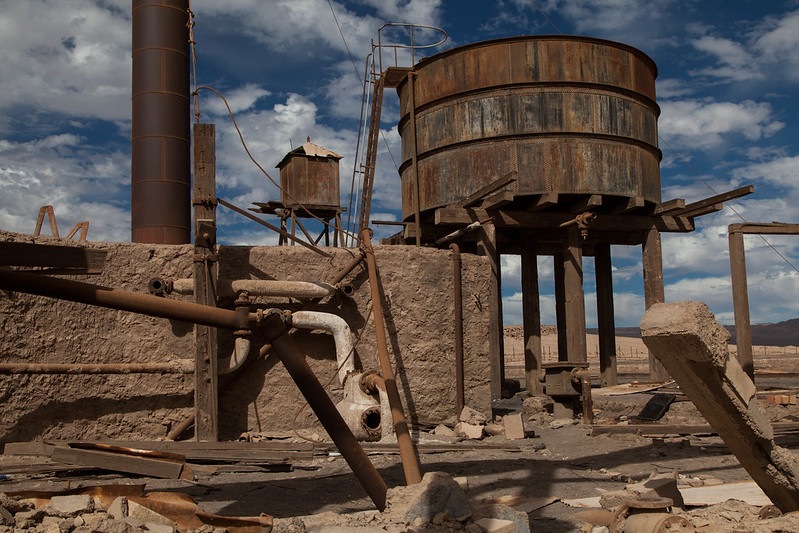 Abandoned settlements can be found all over northern Chile. They are the remains of the once very lucrative nitrate industry.

In the first half of the 20th century, towns were rapidly built to house the many workers required to mine the nitrate.

However, when the industry turned and was no longer viable, these communities quickly fell into ruin.

This was the case for Chacabuco, which is not only one of the largest ghost towns in Chile, it was once used as a concentration camp during the earliest period of the Pinochet military dictatorship.

In short, it is a remote, must-see visit for any discerning dark tourist in Chile.

Chacabuco Mining Town was first established in 1924 by the Lautaro Nitrate Company Ltd, to take advantage of the nitrate mining boom going on in Chile at the time.

However, the mines there were short-lived. The American depression in the 1930s alongside the invention of synthetic nitrate by the Germans meant that by the 1940 northern Chile’s nitrate industry was on its last legs.

The impact of the demise was dramatic. What had been almost 50% of Chile’s Gross National Product fell to almost zero.

As a town, Chacabuco had only survived 14 years. As the mines closed, the workers left for opportunities elsewhere. What had once been a bustling community of over 5,000 workers and their families became abandoned.

Facilities such as the theater, library, pool, and sports center and of course all the houses, fell in to ruin.

Chacabuco became a time capsule of Chilian life in the 30s. So much so the government declared it a national monument and began protecting it in 1971.

However, this coveted status did not last long. After the 1973 Coup d’État made by General Augusto Pinochet, the future of Chacabuco became very bleak indeed.

During Pinochet’s regime, part of the city was turned into a prison and torture camp for those that opposed his rule. This was generally the intellectual class, so the prison was full of doctors, lawyers, artists, writers, professors from all over Chile.

To house the prisoners a large area of Chacabuco was surrounded by electrified fences and watchtowers. Beyond that perimeter, the site was secured by landmines. (There is currently believed to be 98 lost landmines around Chacabuco, so visitors beware.)

In a rather tragic twist of irony, the government undersecretary of education who had signed off on Chacabuco becoming a national monument just 2 years before, was imprisoned too. He died shortly after release.

Approximately 1,800 prisoners were held there during its two-year use. The vast majority never made it out alive.

After the prison closed, Chacabuco was again abandoned and left to the elements. It remained this way until the 1990s when preservation attempts finally began.

After the end of Pinochet’s dictatorship ownership of the site fell to the Ministry of National Properties.

Headed by an ex-prisoner of Chacabuco, two former inmates of the camp returned to look after the site as caretakers.

The first was Roberto Saldívar. He lived there until his death in 2006. At this stage, the responsibility was to prevent further damage from vandalism, (the town church had been burned to the ground by arsonists sometime in the 1980s).

Pedro Barreda took over from Saldívar and still lives there to this day.

Where is Chacabuco Ghost Town

Unfortunately, little funding has come from the government in restoring the town.

In 1992 a small amount of restoration work was made on the old theatre with aid from Germany’s Goethe Institute. This culminated in a permanent exhibition in the former library rooms connected to the theatre.

Today, the theatre is by far the most pristine building in the town. The grand, whitewashed, three-story building stands proudly, adjacent to the main square.

This too has seen some refurbishment works done. The square now contains a children’s play area, some benches, and newly planted trees surround a small bandstand type construction.

The effect is disconcerting, however. The rest of Chacabuco remains an abandoned ghost town, encroaching on this small pocket of newness.

Many of the original buildings are at risk of collapse through neglect. Streets and pathways are covered in dust and debris.

Parts of the nitrate production plant still exist. The 35m high chimney is the tallest structure in Chacabuco.

All this being said, the tourist board has made headway on making the town easier to navigate for visitors.

Bilingual signs (Spanish and English) are present around the site. A large panel in the square provides a guide to the site, as well as a map.

You can then follow a route that leads you past 8 more informational panels along a circuit around the town.

North-west of the square is where the prison camp section used to be. There are no watchtowers or fences left, however, some of the original worker’s buildings that were used as prison wards during the life of the camp do remain.

It is best not to wander past the old perimeter here due to the aforementioned mine situation.

Despite most of the buildings being in a nearly ruined state, it is still very interesting to walk among them. Some still feature interesting wall murals, presumably created by former prisoners.

The almost apocalyptic vibe is further increased by random objects strewn in the road, broken windows, and loose hanging doors. It is a very eerie place to be.

South of the main square are some larger buildings that used to be the mining company administration offices. There is also the old supermarket from when the town was a thriving community.

Behind these, you will find the ruins of some workshops. Amazingly some of the old industrial machinery still exist, large rusting hulks destined to be inside these dilapidated buildings forever.

To see the nitrate production facilities you need to head to the eastern side of town. (Just follow the chimney stack). Here you will find more old machines, industrial debris, and most impressive of all, remnants of the giant boilers.

Finally, you should check out the north of the town (beyond the main residential streets).

Here you will find the ruins of larger houses that once belonged to the managers and upper-level administrators of the town.

You can just about make out some of the former grandeur. The footprint of the buildings hints to the relative luxury of the living conditions, compared to the smaller dwellings nearer the center.

Look out for some of the abandoned vehicles here too. The sight of these old 1920s car wrecks makes you wish you could take them home for restoration.

After taking a tour around the town it is worth venturing upstairs inside the theatre.

There are also some glass display cabinets with items that once belonged to the workers; tools, clothes, and shoes for example.

There is also information about Chacabuco as a detention camp, including artifacts from the time such as barbed wire, bullets, and quotes from the inmates’ testimonies during their incarcaration.

Hi, I’m from Chile. I like your website and this article, but you got the wrong ubication in your map. There is a province also called Chacabuco near Santiago, but the ghost town is actually far north, in a different region. You should put Chabuco, Antofagasta (different region and province). So, if you want to go there, you should look for a place to stay in Calama city or San Pedro de Atacama (this last one is far more turistic, so it’s also far more expensive). I hope this could help. Keep the good work going

Hi Juan, thank you so much for taking the time to correct us on our mistake, (and for the kind words about DarkTourists.com), we’re adjusting the map as we speak. Have you been to Chabuco? Would love to hear your thoughts if you have…

This website uses cookies to improve your experience while you navigate through the website. Out of these cookies, the cookies that are categorized as necessary are stored on your browser as they are essential for the working of basic functionalities of the website. We also use third-party cookies that help us analyze and understand how you use this website. These cookies will be stored in your browser only with your consent. You also have the option to opt-out of these cookies. But opting out of some of these cookies may have an effect on your browsing experience.
Necessary Always Enabled
Necessary cookies are absolutely essential for the website to function properly. This category only includes cookies that ensures basic functionalities and security features of the website. These cookies do not store any personal information.
Non-necessary
Any cookies that may not be particularly necessary for the website to function and is used specifically to collect user personal data via analytics, ads, other embedded contents are termed as non-necessary cookies. It is mandatory to procure user consent prior to running these cookies on your website.
SAVE & ACCEPT
wpDiscuz
2
0
Would love your thoughts, please comment.x
()
x
| Reply