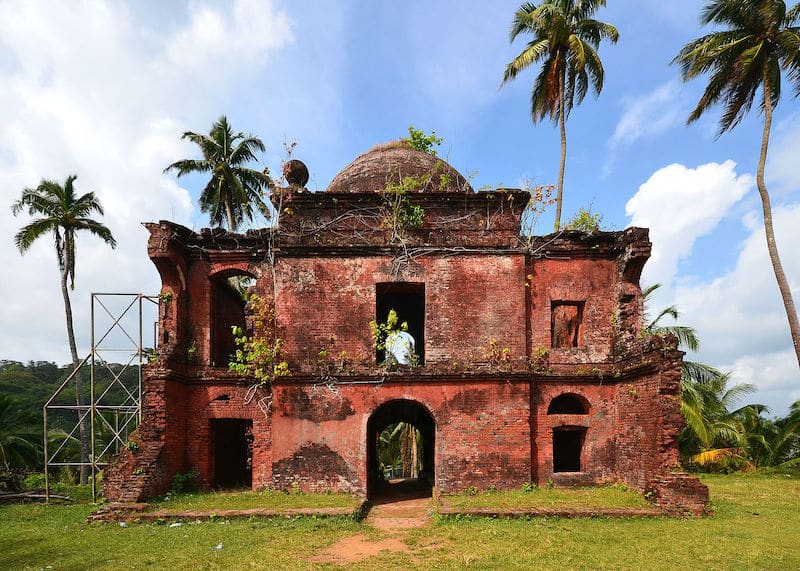 If you take a trip to Viper Island in the sound of Port Blair, Andaman Islands, you will find the ruins of a former British colonial-era penal colony prison.

Not much remains, however it is still worth taking the time to visit this dark tourist spot.

The gallows building still stands as well as a few other structures from the penal complex. The fact the site has been repurposed for tourism is also a plus.

Information panels in English provide context as you walk around and guides are available too.

The boat ride across to Viper Island is also stunning, making it a worthwhile venture if you are in the area.

The rather ominous-sounding name has nothing to do with snakes or the fact the island used to be a penal colony. It is derived from the name of the vessel “H.M.S. Viper” in which the British Lt. Archibald Blair first arrived at the Andaman and Nicobar Islands in 1789.

The vessel came into trouble during a storm nearby and the wreckage was later found off the coast of the island.

It would be almost 70 years before the British decided to convert the Andaman Islands to a penal complex.

The larger penal colony at nearby Port Blair (named after the stricken Lt.) was originally built in 1958 to house prisoners of the Indian Rebellion.

At that time Ross Island was chosen as the headquarters of the penal settlement.

When more space was required for the complex, the British turned towards Viper Island, with the construction and development of Viper Jail taking place between 1864–67.

The building work was done using slave labor from the prisons at Blair Port.

The jail was notoriously harsh. Solitary cells, lock-ups, stocks, and whipping stands were built. It was also a brutal place where women prisoners could also be held.

One particularly nasty practice the authorities used was to chain prisoners together at night. Using coupling irons inmates would be linked at the legs, giving the place its nickname “Viper Chain Gang Jail”.

During the day they would be subject to hard labor. Essentially, the British used the jail to inflict some of the worst torture and hardship on those that had actively supported a free India against British rule.

In addition to brutal incarceration, Viper Island was also a gallows. Executions were regularly held, the most infamous of which was that of Shere Ali.

Ali had murdered Lord Mayo, the British Viceroy of India, in 1872. His hanging made headlines across the Empire.

However, the importance of Viper island as a penal colony declined after the construction of the Cellular Jail in 1906. Not long after the prisoners were relocated and the prison closed for good.

Where is Viper Island?

Viper Island is a very beautiful tourist destination. It can be accessed via regular 20-minute boat trips from Port Blair’s harbor.

Upon arrival at Viper Island, you will see the remains of the former prison guardhouse beside the pier head.

The two-storied jail building stands as a semi-ruin. Half of the roof has caved in and an outer wall is dilapidated.

Around these, you will find information boards describing the colony and the conditions for the prisoners during the 19th century. Some of them contain prints of original photographs too.

Up from the jail is a strangely picturesque red-brick, temple-like ruin that was once the gallows. A panel here displays a photo of Shere Ali and the history behind the murder of Lord Mayo.

That is all that remains of the colony on Viper Island, however as already mentioned, the beautiful scenery and the interesting history make the trip more than worthwhile.

There are a number of operators that run boat trips to the island from Port Blair. Just head to the tourist buildings on the jetty and browse the kiosks there.

You can also prearrange via a travel agent or book a trip online before you arrive.

It is also a good idea to incorporate a visit to Viper Island as part of a longer tour itinerary that include nearby Ross Island and Havelock.