Čachtice Castle is a dark tourist destination that requires a bit of imagination. The place is a complete ruin, and as yet, the Slovakian tourist board has done little to highlight the sinister history connected to the site.

This is a surprise, as Čachtice Castle played host to one of the most gruesome (alleged) serial murder sprees in history.

In the early 17th Century, the castle was owned by Hungarian countess, Elizabeth Bathory. As the famous legend goes, Bathory’s servants would lure young women to the castle so that the countess could butcher them.

Her aim was eternal youth, brought about by bathing in the blood of virgins. By the time she was caught, she was found guilty for the murder of over 600 women.

As punishment, she was placed under house arrest. Enclosed in a single room at the castle, the countess received her meals through a small hole in the wall. She would die in that same room just 4 years later.

Separating fact from fiction is very difficult when it comes to the ‘story’ of Bathory.

For most of the 400 years following her alleged crimes, Slovakia has been under authoritarian rule of some kind. From warring royalty to oligarchs and dictators, the pages of history concerning Bathory had been buried and discredited.

In the absence of evidence, sensationalism has flourished. So much so, the story of the “Blood Countess” is said to have influenced Bram Stoker in the creation of the ultimate vampire.

Searching for the truth has only been a possibility since the fall of the Soviet Union, and even then the passage of time and the extent of the myth represent enormous barriers. 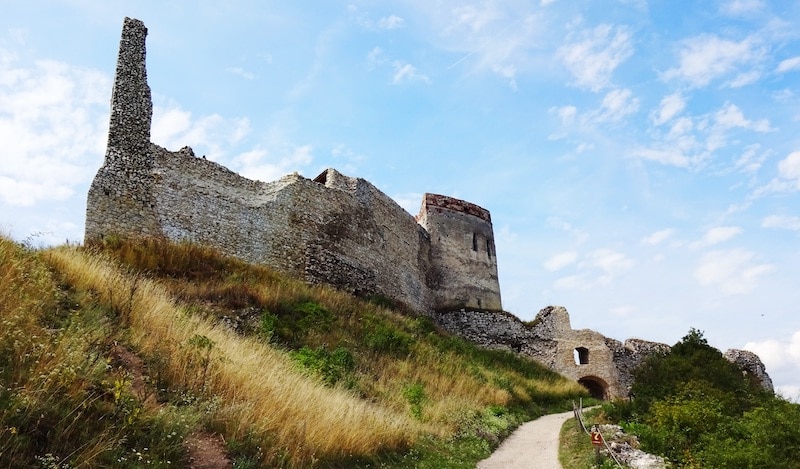 We do know that Elizabeth Bathory did exist and that she lived and died at Čachtice. And as part of a powerful Hungarian family, her place in history was already established without the alleged crimes.

The castle came into her ownership as a wedding present from her husband. The surrounding fiefdom of 17 villages formed part of the package.

Things were good in the Bathory household, to begin with. She fulfilled her duty as a wife and bore 3 children. Her husband spent most of his time away in battles, as was the case with most aristocratic men of the age.

Maybe boredom and loneliness got the better of her. There is evidence of accusations in the early 1600s that she was heavy-handed with her staff, however, this was hardly uncommon in the middle ages.

However, it was after her husband’s death in 1604 where the story takes a turn.

She moves to Čachtice Castle full time and all hell seems to break loose.

This is where myth and speculation really do take over.

The belief is that Bathory went insane and between her husband’s death until her trial in 1610 she managed to murder a possible 650 women and female servants.

Logic would suggest that the number is ridiculous. Yes, she was borderline untouchable due to her position in society, however, to get away with that number of murders without raising objection seems unlikely.

The nature of the alleged crimes also seems too brutal to be true.

The depositions at her trial state the torture of girls was commonplace, she was also partial to a bit of dismemberment and liked to boil them alive. One even states that she made sausages from the girl’s flesh and ate them.

An enduring detail of the alleged crimes is that she would drain the blood from the victims so that she could bathe in their blood. Bathory’s obsession with eternal youth is a pivotal part of the myth. Unfortunately, there is no evidence to support that this was true.

It was a trip from her son-in-law that ended the reign of terror. He arrived with some of his hunting dogs. The smell of decomposing bodies buried in the castle grounds was clearly too much for them. The dogs dug them up and dragged them to their master  Or so the story goes…

Ultimately, the sinister activities were brought to the attention of those higher in standing than Bathory. György Thurzó, the Palatine of Hungary, was ordered to arrest her.

Those that arrived to arrest Bathory allegedly discovered tortured women on the brink of death, and dead bodies littering the castle.

Her loyal servants (those that had lured the victims to the castle) were immediately put on trial. They didn’t last long. Bathory’s collaborators were burned alive.

Interestingly, the records indicate that Elizabeth was not named as the sole perpetrator. It was rather the Bathory household on trial for the crimes.

It is believed she escaped the death penalty because of her status. All the same, she didn’t fare much better with the eternal house arrest.

Elizabeth was locked in the castle for four years, receiving her meals through that slot in the wall.

After being found dead in 1614, she was buried in the local cemetery. This did not go down well with the locals.

The body was eventually moved. Bathory’s final resting place was the family estate in Ecsed, Hungary.

Bathory had no shortage of people with a reason to frame her. Those that testified were the servants and extended family of her late husband.

With Elizabeth out of the way, they stood to gain huge amounts of property and could relinquish control of the family empire.

Others were also keen to seize property and wealth from the Bathory clan. She was a woman with a lot of power, within the political landscape of the time this was a dangerous position to be in.

Most damning of all (in support of her innocence) is the fact there is no evidence that these crimes were committed.

Personal letters from aristocrats of the time speak nothing of her evils.

It would take another 100 years for the bathing in the blood of virgins to enter the narrative. This embellishment came from a Catholic priest who revived the story to discredit her.

Uncertainty as to the truth behind the myth is so great, it is unlikely that we will ever know what really happened at Cachtice Castle.

Where is Čachtice Castle

The castle has been abandoned since 1708. Much looting took place over the years and Čachtice is now in ruins.

Visitors should head to the town of Čachtice, where they can check out the small museum in the main square. The church where Elizabeth Bathory’s body was originally interred is also still standing in the town.

There is a car park about a 20-minute walk from the castle. The views are amazing but do not expect much in the way of education once you reach the site. It is best to read up on the story before.