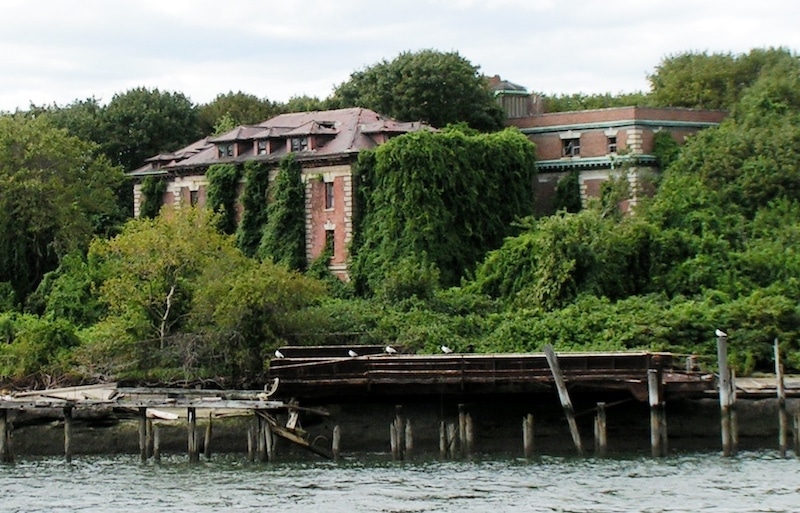 North Brother Island, located on the East River between the Bronx and Riker’s Island in New York, is a place with a dark history.

Not only is the island home to the worst loss of life in New York’s history until Bin Laden’s terrorists attacked the twin towers, but it has also been the chosen location to treat typhoid sufferers, tuberculosis victims, and house WWII veterans, and drug addicts.

Now, the entire island sits abandoned. The once-grand Victorian buildings are in ruins, choked by the undergrowth that now commands the land.

Entering is by authorization of the Parks Authority; only dark tourists with a good reason can set foot on the island legally.

The island was uninhabited until 1885. At this point, the city purchased the island so they could relocate the old Riverside Hospital on Roosevelt Island, to a brand new building on North Brother Island.

The hospital was designed for the unfortunate souls suffering from contagious diseases. Closed off to the mainland, patients were victims of diseases such as typhus, tuberculosis, yellow fever, and smallpox.

The most famous resident at the hospital was one “Typhoid Mary” Mallon. She was the first documented asymptomatic carrier in the U.S of the bacteria that causes typhoid fever.

Mallon was quarantined at Riverside Hospital in 1907 after seven households where she had worked as a cook had typhoid fever outbreaks.

Doctors at the hospital concluded that Mallon carried the bacteria, despite having no typhoid symptoms.

After 3 years of quarantine she was released in 1910, and told not to go back to being a cook; advice she duly ignored.

Before long there were typhoid fever outbreaks wherever she took up residence. By 1915 she was back at North Brother Island, where she ended up spending the rest of her days in strict quarantine. She died at the hospital from pneumonia in 1938.

A few years before Mary first stepped ashore, the island hit the headlines due to the tragic loss of life involved in a boating disaster.

On June 15, 1904, a steamship called General Slocum burst into flames and sank in the East River beside North Brother Island.

Many of the hospital staff assisted in the rescue, jumping into the waters to drag some of the 321 survivors to safety.

1,021 passengers died, however, their bodies washed up onto the shore of the island for days afterward.

New York would not experience a larger loss of life from one incident until 2001.

During WWII a tuberculosis facility was opened on the island. However, within a handful of years the widespread use of the tuberculosis vaccine after 1945, meant that the center was deemed obsolete.

Repurposed as residential relief for WWII veterans and their families, the island attempted to assist in Manhatten’s increasingly dire housing situation by accommodating those returning from the now silent battlefields of Europe.

Once the housing shortage was no longer a problem, the island was abandoned until the 1950s. Its next incarnation would be as a center to treat adolescent drug addicts.

Controversy would surround this, however. Heroin addicts were confined much like the quarantine victims of old. Locked in a room until they were clean, many suffered greatly, believing they were being held against their will.

Bad press, undesirable results (drug addicts often left in the worst condition than their arrival) and staff corruption forced the facility to close in 1963.

North Brother Island has been abandoned ever since. It is now a bird sanctuary for Black-Crowned Night Herons.

Where is North Brother Island?

North Brother Island is a protected area. Authorized access to the island is rare. The Parks and Recreation authority does consider requests for entry under specific conditions, however.

Access is available within allowable time and should be for “compelling academic and scientific purposes”. They have a form on their website for applicants, (although no visits are taking place during the current coronavirus outbreak).

In non-COVID times the island is closed between March 21 and September 21, due to the shorebird breeding season.

Illegal entry is possible of course. You just need to be good friends with a boat owning local, or a willing to kayak across to the island.

Beware, however, police do patrol the waters of the East River, (Rikers Island Correctional Institute is less than a mile away).

What you can expect to see on North Brother Island

Should you get permission to access North Brother Island you are in for a treat. The eerie, abandoned location is a dark explorers dream.

The island is accessible only by boat, with the most convenient departure point from New York, being Barretto Point Park in the South Bronx.

Assuming you have contacted the park authority about your trip, one of their escorts will be joining you for the day.

Pulling up to the island you will see the first signs of the aged dilapidation. Broken dock supports protrude from the water like the blackened, rotten teeth of a hobo.

What once was a bustling port for the disembarking of hospital workers and supplies is now covered in kelp and almost totally submerged during high tide.

Leaving the boat and walking onto the island, your path is immediately impeded by the encroaching overgrowth.

Remnants of streets and sidewalks can barely be traced beneath the thick tentacles of weed and trees. The island’s sub-canopy is choked with native plants of all sizes.

One of the first buildings you reach from the dock is the morgue. The cracked chimney juts above the treeline, visible long before you reach the ruined walls of the facade.

The buildings are off-limits mind you, your Park official will ensure that you comply. Everything is in a dangerous state of disrepair and it is easy to see why you are not allowed.

Still, looking through the glassless windows and broken doors it is possible to see the equipment left behind after the last inhabitants abandoned the island in 1963.

Rusted bed frames are stacked against walls, and rotted cupboards, chairs, and shelves are strewn around the floor.

Ivy too dominates here, a double tennis court is all but visible beneath the dull, green stranglehold.

One impressive building seems relatively intact. During the years North Brother Island was a hospital, many of the workers opted to live in the Nurse’s Home rather than shuttle back and forth on the ferry.

Here, the 40,000-square-foot Victorian-style mansion offers tantalizing evidence of what life was once like. A large porcelain bathtub and colored tiling can be seen in one of the downstairs bathrooms.

Further on, you will come across The Staff House. Constructed in 1885, this is one of the oldest (and most dilapidated) structures on the island.

Beyond this is the Male Dormitory, built the same year it now has collapsed ceilings and trees growing through the roof.

The largest building that still exists is the Tuberculosis Pavilion. This sprawling four-story, 83,000-square-foot building was the last structure to be completed on North Brother Island.

It is here that World War II veterans were housed in the aftermath of the war. This large, brooding building oozes with post-apocalyptic gloom.

Moving on and in places, the foliage is too thick to allow passage. After everyone left almost six decades ago, the island has been left to mother nature.

To this day, the city seems unsure of what the future will bring here. For now, the authorities are content to allow this (somewhat prime) real estate to be the domain of history and as a bird sanctuary, which is the role it officially has now.

That being said, North Brother Island may never see redevelopment for the purpose of human habitat.

The land is ground-zero for rising sea levels. According to extreme climate change projections, the island will be completely underwater by 2100.