Visiting the Actun Tunichil Muknal (ATM cave) in Belize is quite the experience.

The name translates as “Cave of the Crystal Sepulchre,” and once you make it inside (the journey is a small adventure in itself) the Mayan artifacts are a sight to behold.

There are several skeletal remains inside the main chamber, the most famous being the “Crystal Maiden”.

This is the skeleton of an 18-year-old girl, believed to have been the victim of a Mayan sacrificial killing.

For over 1000 years she lay undiscovered in the cave, the subterranean conditions calcifying her bones into a crystallized sparkle.

Mayan Legend – The Entrance to Hell

The fact the cave remained a secret for so long is no small wonder. Locals knew it as the “Xibalba” after the Mayan death gods.

According to myth, this was the entrance to hell, a deep fissure in the earth filled with rivers of blood and scorpions.

If that wasn’t enough, the depths of the cave were said to house the subterranean court of the “Lords of Xibalba”.

It was here that they wielded their power, inflicting death and disease on all that crossed them.

Belief or superstition, the legends were enough to keep the locals away.

It wasn’t until 1986, after the cave’s discovery by Archaeologist Thomas Miller that the historical importance of ATM and its contents became known.

Where is the ATM Cave and How to Get There?

The Actun Tunichil Muknal is a jungle cave in what is now, the Tapir Mountain Nature Reserve.

In an impressive move towards prioritizing the preservation of the cave, licenses have been granted to only a small group of agents.

The only way for a tourist to visit the ATM cave is via one of these official tours.

The most popular starting point is San Ignacio, Belize. From here you will be able to take a one hour drive (organized by the tour) to the reserve.

After that, you will walk for an hour through shallow rivers and the jungle until you reach the ATM cave mouth.

Here, you will go for a swim. And that crystal blue water is cold!

The skeletal remains are approximately a mile into the cave. The journey will take you along the cave river, through strands of tight, glimmering stalactites, as you chase the shadows outside the beam of your headlamp.

At one point you will reach a huge cavernous room known as the “Cathedral”, it is here where you will begin to find the 1000-year-old victims of ritual Maya sacrifices.

Inside the main chamber

14 people, including six children under the age of three, were killed here.

Some of the sacrificed infants have been stuffed into crevices in adjoining caves.

There is also the skeleton of a seven-year-old and a teenager who appears to have been bound before execution. A number of adult skeletons are aged between thirty and forty-five.

Almost all were killed by blunt trauma to the head. In some instances, the entire skull has been destroyed.

The most famous of these long-dead Maya is the aforementioned Crystal Maiden. Her skeleton is lying on its back. The fact her head is raised gives the impression she is looking at you.

The calcified crystals adorn every inch of bone, making her glitter in the light of the headlamps. Like the others, she died in a violent way. She has two crushed vertebrae, and from her position, it seems as if she were dumped there.

The precise dating of the bodies has proved difficult due to the calcifying process. However, clues exist in the pottery that is strewn about the site. Much of this dates between 700 and 900 AD.

Inside the chamber, you will also find many cave formations carved by the Maya. Silhouettes of faces and animals glare ominously from the walls. 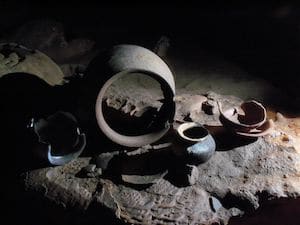 The current top-rated Viator guided tour of the ATM cave (complete with pick up and drop off from San Ignacio), is this excellent offering.

The 9-hour tour will take you on the jungle hike through the Tapir Nature Reserve to the entrance of the cave.

Here, you will do everything described above. Swim, climb and crawl through the cave until you make it to the Maya remains. Gear and a riverside lunch are included.

Remember, you cannot visit the cave without a licensed guide so it is a good idea to book online before your trip to Belize.

Shoes are not permitted in the cathedral so bring spare socks for that. Your shoes will need to be suitable for hiking and swimming. Spare, dry clothing is advised for the end of the tour. The guide will provide you with a helmet and headlamp.

There are quite strict rules on what can be brought into the cave; cell phones, cameras, food, and backpacks are not allowed.