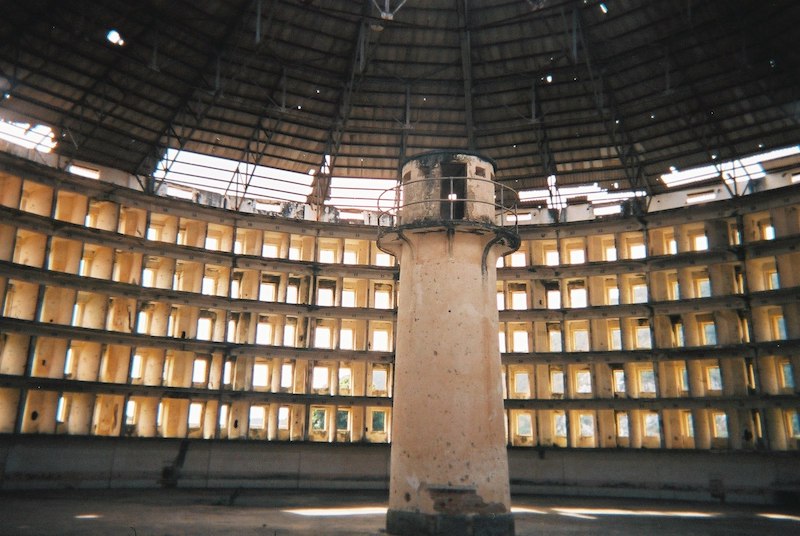 On a remote island off the coast of Cuba stands what was supposed to be a Presidio Modelo or “Model Prison”.

The complex of circular cell blocks once housed a range of prisoners, from murderers to political dissidents and counterrevolutionaries. Fidel Castro himself was an inmate for 2 years.

Described by French philosopher Michel Foucault as the perfect model of disciplinary power, the reality was very different.

After nearly 40 years of operation, overcrowding led to riots and the eventual closing of the prison in 1967.

The once-abandoned complex now serves as a museum and is declared a national monument on Isla de la Juventud.

The History of Presidio Modelo

Modeled after Jeremy Bentham’s Panopticon design, the prison was commissioned by Cuban president-turned-dictator Gerardo Machado in 1926.

The principle was a simple one; 5 circular blocks with tired cells were built around central observation posts. From these posts, prison guards could provide around the clock surveillance of the inmates.

The capacity was 2,500 prisoners, however, the conditions were far from humane. The system of incarceration was akin to a battery chicken farm, with the inmates packed into the overcrowded cells.

In fact, by the time Fidel Castro was imprisoned at Presidio Modelo for his part in the 1953 attack on Moncada Barracks, the prison was holding more than double the number of prisoners it was designed for.

With over 6,000 caged men, the floor was filled with trash and the stench of excrement (there was no running water), was everywhere. Food was tight, and tensions were high. Violence, rioting and hunger strikes were common.

The Release of Fidel Castro

Things grew worse after Castro became a free man and sized power of Cuba in 1959. Anyone that spoke out against the regime received a one-way ticket to Presidio Modelo.

The overcrowding grew out of control and the site could no longer function as a prison. Finally, in 1967 the model prison was closed and the inmates sent to the mainland for incarceration.

Where is Presidio Modelo

Isla de la Juventud is south of the main island of Cuba.

You can get a boat from the port in Batabanó. This will take around 2 hours. Another way to get to the island is via a 30-minute flight from Havana.

Needless to say, you should book accommodation in Nueva Gerona, which is the nearest town to the prison.

The prison complex is almost abandoned. The unassuming exhibition center is hidden to the rear of the site in an old hospital building.

This only adds to the impact of walking around Presidio Modelo today. The imposing, derelict buildings can be completely explored.

Health and safety is not really an issue here, the daring can climb up broken stairways and walk around the abandoned corridors and decaying cells without interruption.

In fact, if you are lucky, you will not see anyone else during your trip as the prison is well off the traditional tourist trail. So much so, when you reach the museum exhibition, everything is written in Spanish.

For a dark tourist in Cuba, this is an essential part of the itinerary.