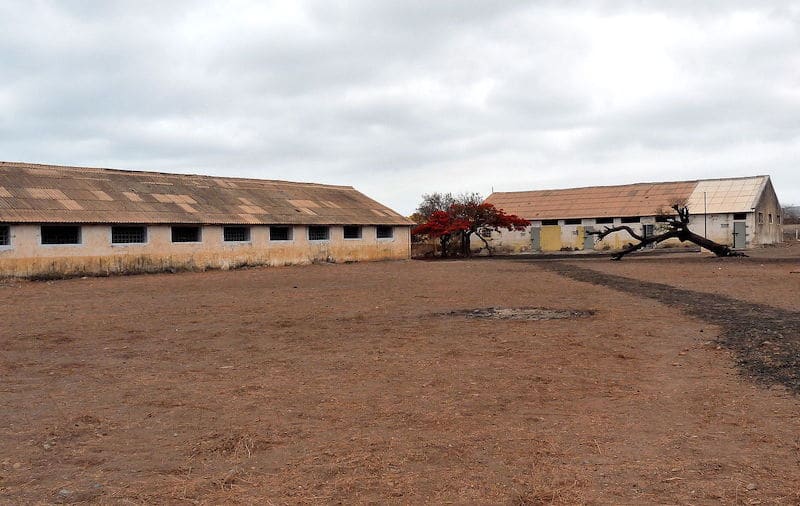 Tarrafal was once known as Campo da Morte Lenta (the “Camp of the Slow Death” in Portuguese). Those unfortunate enough to end up there suffered greatly.

A notorious concentration camp in the Portuguese colony of Cape Verde, it was established after the outbreak of the Spanish Civil War in 1936. Enemies of the state (i.e anyone that spoke out against Portugal’s right-wing authoritarian regime) wound up at Tarrafal.

Their demise once incarcerated was slow and painful. At least 32 political prisoners were known to have died in the camp.

By 1932 António de Oliveira Salazar was Portugal’s Prime Minister and his heavy-handed leadership quickly saw to the overpopulation of the country’s prison system.

Modeled on Benito Mussolini’s fascist state, left-wing opponents were rounded up and banged up with the concept of a fair trial nowhere in sight.

This called for the need for an overseas penal colony so that political dissidents could be banished. The Portuguese colonies were perfect for this, and many locations were considered.

Santiago Island in the Cape Verde archipelago was the first planned colony. Apparently the site would provide the best “hygiene, surveillance, and natural resources” for a prison complex.

Salazar’s authoritarian regime wanted to drive home the fact that it would not tolerate any kind of political dissent. To this end, Tarrafal was set up from the outset to be harsh and uncompromising.

First Inmates and Opening of the Colony

On 18 October 1936, a ship departed Lisbon carrying 152 political prisoners. Construction of the prison colony was completed during the weeks the first prisoners were in transit.

However, construction can be termed quite loosely in this context. For the first 2 years of the prison’s operation, inmates slept in canvas tents. There was no electricity of appropriate ventilation considering the heat.

There was no running water either. Old fuel cans were used to collect brackish, unclean water from a source that was over 2km away. Part of the prisoner’s job was to fetch this daily.

When the sun wasn’t parching the inmates to near death, they had to endure an extended wet season. During this, the tents rotted, and everything became a quagmire. Malaria was rampant too.

After 4 years of operation, the colony was finally rebuilt in brick. The developed site could house 4,000 prisoners and had facilities such as a health center, reading room, guard towers, and barracks.

There was also a small railway to transport supplies and fuel.

This new design and operational regime were modeled on the Nazi concentration camps of WW2. The conditions and treatment of prisoners were brutal.

Men and women cohabited with the rape of the latter taking place from both fellow prisoners and guards.

All inmates were tortured for information on their organizations and networks in Portugal.

A technique that brought about extreme dehydration, heat exhaustion, and death was the isolation chamber.

Called the frigideira (“frying pan”), the windowless cell had daytime temperatures of up to 60° Celsius. Prisoners were held for days, weeks, or months in order to extract information.

Finally, the camp was closed in this guise in 1954. The national and international pressure was proving too great for the Portuguese authorities to ignore.

A forced labor camp for African leaders and Militants

By 1961 the camp was once again in operation. Reopened on the orders of Adriano Moreira, the Minister of the Overseas Provinces, it was used as a forced labor camp for African leaders and militants.

Prisoners that were fighting Portuguese colonialism among the colonies were sent here, the majority from Cape Verde, Angola, and Guinea-Bissau.

Conditions were again terrible, however, prisoners did have the opportunity to improve their education and knowledge via classes they held among themselves.

After the Carnation Revolution on 25 April 1974 (which brought an end to Portugal’s 50-year-old authoritarian regime), Tarrafal was closed for good.

A year later the Portuguese government returned the site over to Cape Verde after it achieved its independence.

Where is Tarrafal Former Prison Colony?

The camp is situated 1.5 km south of the village of Tarrafal. It is at northern end Santiago (approx 30 miles from the capital Praia)

You can walk to the site from Tarrafal village. Your own car or taxi is recommended in the heat, however. The museum has a carpark outside the main entrance gates.

The site has served several purposes since closing as a prison. It was first used as a military base, then a refugee camp and a storage facility. In more recent years it was even used as a school.

Now, however, the site is a museum showcasing the treatment of political prisoners during Portugal’s authoritarian regime of the mid 20th century.

The Museu da Resistência as it is called features a collection of photos, plaques, and artifacts detailing its troubled history as a penal colony.

This is housed in one of the remaining cell blocks and is ordered thematically and partly chronologically.

The eventual aim of the project is for the site to become a World Heritage site, (in 2006, the World Monument Fund named Tarrafal one of its 100 watched monuments).

A Walking Tour of Tarrafal

Tarrafal is more like a prison ghost-town as you walk around it. The atmosphere is eerie and foreboding even in the bright, clear blue skies of a Cape Verde day.

Once you have passed the main gate and paid the entrance fee, you are unlikely to see anyone else at the site, it is strangely quiet and clearly not that popular with tourists.

The stone barracks and cell blocks with barred windows are still very much intact, adding to the overall ghost town atmosphere.

Labels helpfully provide information on what the various buildings used to be used for. There’s also graffiti from former prisoners which is always a poignant sight, whichever dark tourist location you happen to be at.

The prison’s hospital still exists, standing in the center of the complex. The dining halls and kitchen area can be found in the western section of the site. Here more signs provide context to what you are seeing in front of you.

The block of solitary confinement cells are extremely thought-provoking. Walking amongst these it is impossible not to think of the anguish and pain that the prisoners would have suffered within these stone walls.

The creaky doors with their iron bars also remain, only adding to the overall impact.

The colony security measures also exist. The concrete trench that surrounds the camp is very much intact, along with the old and rusted barbed wire fence. Broken platforms that were once the watchtowers stand on each corner.

Overall, you certainly get a feel for what Tarrafal must have been like as a prison colony. It is a must-see visit for any dark tourist in Santiago.