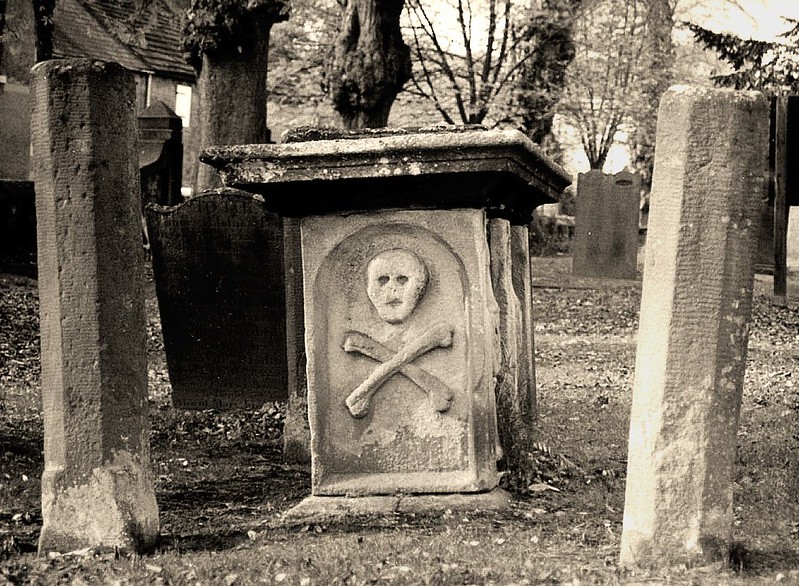 Eyam, located in the Peak District, Derbyshire, England, is a place with a dark history. And it all stems from a moment of innocence.

Back in 1665, a local tailor ordered some materials from London so that he could make clothes for the villagers.

Little did he know that this simple delivery would wreak havoc on the small community. In fact, it would decimate the village. The tailor had brought the bubonic plague to that area of England and 260 Eyam villagers would end up dying as a result.

It was a mortality rate twice as high as London during the Great Plague.

The village never fully recovered, however, today this idyllic picture-postcard location has a dedicated museum that details the events of the plague in Eyam and other aspects of local history.

For a dark tourist in this part of England, it is definitely worth a visit.

The museum has an eclectic collection of artifacts covering the lives of Eyam locals over the past few centuries.

It covers a short history of medicine in the 17th century which provides an insightful background to the events of 1665.

The village is well known for the devastating impact that the plague had on its citizens and most of the museum is dedicated to educating visitors on this macabre topic.

A series of displays provide information on the path of the plague from London to Eyam via the arrival of that package of cloth for the tailor.

There is also a rather effective tableau of rectors Stanley and Mompesson. It is known that they had taken a lead role in attempting to contain the outbreak from reaching nearby villages, and this scene depicts them discussing a plan of action.

Part of the solution was to set up a Boundary Stone between Eyam and the village of Stoney Middleton. One exhibit is a half-sized replica of the stone.

This reconstruction of the stone has small depressions that are filled with vinegar. At the time it was believed it would help the plague from spreading. A disinfectant for the middle-ages if you will.

Money was placed into the vinegar by Eyam locals so that it could be “safely” exchanged for food and supplies.

In another part of the museum, there is a chilling display that shows the last hours of a plague victim.

This leads to exhibits that show the different types of remedies people used to try to fight off the plague or deal with the symptoms.

Where the museum highlights other periods of Eyam’s history, you will find displays of prehistoric tools found locally, as well as fossils, coins, and pottery.

There is also an abundance of interesting ephemera, including early postcards, posters, and photographs, as well as historic local documents such as leases, wills, and maps.

Most of the museum is the work of dedicated local history enthusiast Clarence Daniel. He had collected many of the artifacts over decades and had them on display for visitors to his house.

On his death in 1987, the vast collection was passed to the Village Society. They have since added to it all with updated displays and reconstructions and set up the new, official museum that exists today.

Where is Eyam Museum

The museum is easy to find as Eyam is very small. Conveniently, it stands directly opposite the main village car park.

There is a small admission fee (see tab above for details).

One small detail you shouldn’t overlook is the weathervane atop the gable at the museum entrance.

Above the directional arrows is a rat. It is there as a reminder of the plague and how rats were responsible for carrying the disease to humans. A rat is also part of the museum signage.

On the last Sunday of August, a procession is led by the local Rector in what is called “The Plague Memorial Service”

For this, the congregation walks from the Church to Cucklet Delf. During the height of the plague, this was the location where outdoor services were taken place.

A commemoration is held at the same spot every year.